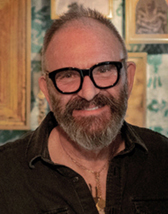 Simon Toparovsky was born in Philadelphia in 1951. After attending the California College of Arts and Crafts and the University of California, Berkeley, he apprenticed to hand bookbinders in the U.S. and England. In 1976 he was invited to head the new apprenticeship program at the Center for Book Arts in New York. While living and teaching there he created a body of artworks, one-of-a-kind books, that are recognized for their craftsmanship, innovation with materials and for pushing the conceptual boundaries of the field. These works are included in many public collections. His Tikal Codex was acquired by the Cooper-Hewitt, National Design Museum of the Smithsonian Institution and awarded the special designation “first book as art for the permanent collection.”

Toparovsky began to focus on narrative sculpture when he moved to Los Angeles in 1981. Working with wax and clay, found objects, manipulated plants and textiles, he has created cast bronze panels, figures and mixed media compositions which stand alone and are used as elements for site-specific installations. He has been commissioned to create private art gardens, significant icons for the Catholic Church and large scale public works.

Since the 1970s his art has been exhibited internationally and acquired for many collections including the Museum of Modern Art and the Metropolitan Museum of Art, in New York; the Getty Center and the Los Angeles County Museum of Art; Centre Pompidou, Beaubourg and the Bibliothèque Nationale in Paris. Among his awards there have been seven grants from the National Endowment for the Arts, including two Visual Artist Fellowships; two Arts/Industry Residencies at Kohler Company; a year-long artist residency at the Virginia Museum of Fine Art, Richmond;  patronage and exhibition sponsorship from the Ministries of Culture of Italy, Russia, France, Lithuania and the U.S.. In 1998, he was awarded the commission to create the life-size bronze crucifix for the main altar of the Cathedral of Our Lady of the Angels, which was consecrated in September 2002.

Toparovsky has been living and working in Los Angeles and Milan since 2000. In 2002 he began a series of collaborations with Italian painter, Ariel Soulé. While each of them maintained independent careers, they developed a project together, Chiasmo— painting and sculpture combined as unique works of art. Their last  exhibition, La Colonna Infame, debuted at the Museum of Contemporary Art, St. Petersburg, Russia in 2011 and travelled in Russia and Europe through 2014.

Simon presented large-scale, provocative installations in a major solo exhibition entitled Vessels and Channels in three magnificent side chapels at the Cathedral of Our Lady of the Angels in Los Angeles from November 2014 through February 2015. From interest in his newest works on paper, elements of those installations, Toparovsky was offered the inaugural Artist Series show at the 24th international photographic arts exhibitions: Photo L.A. and the next solo exhibition at his gallery in Palazzolo sull’Oglio in Italy. Both exhibitions opened in February 2015.

After two years of design and fabrication, a major Italian exhibition of four installations for great rooms of a 12th century fortress castle (scheduled to open in late 2020), was suspended because of the pandemic. In Los Angeles, Simon continued his latest series “Mise en Abîme. work in isolation.” which includes appropriations from his archives, staging for photography, manipulations to create “captured tableaux vivant”. These dry darkroom compositions on paper (and now, new Jacquard tapestries) are celebrations of mystery and remembrance. Installed with one another and in combination with new cast and fabricated bronze, they work as stories within stories–  echoes and reflections in two and three dimensions stir rhetorical conversations. Conjuring the vulnerable and courageous, hidden messages are revealed.                                             more NEWS  >>