Ariel Soulé and Simon Toparovsky, in concert with exhibitions being mounted around the world, celebrate the artistic legacy of the 16th century master Raffaello Sanzio da Urbino (1483-1520). Marking the 500th anniversary of his death, they have created mixed media installations for great rooms in the medieval castle fortress of Jerago, looking out over the hills between the cities of Milano and Varese.  This exhibition will be their first major collaboration since 2010 after many years of working together on diverse international projects. 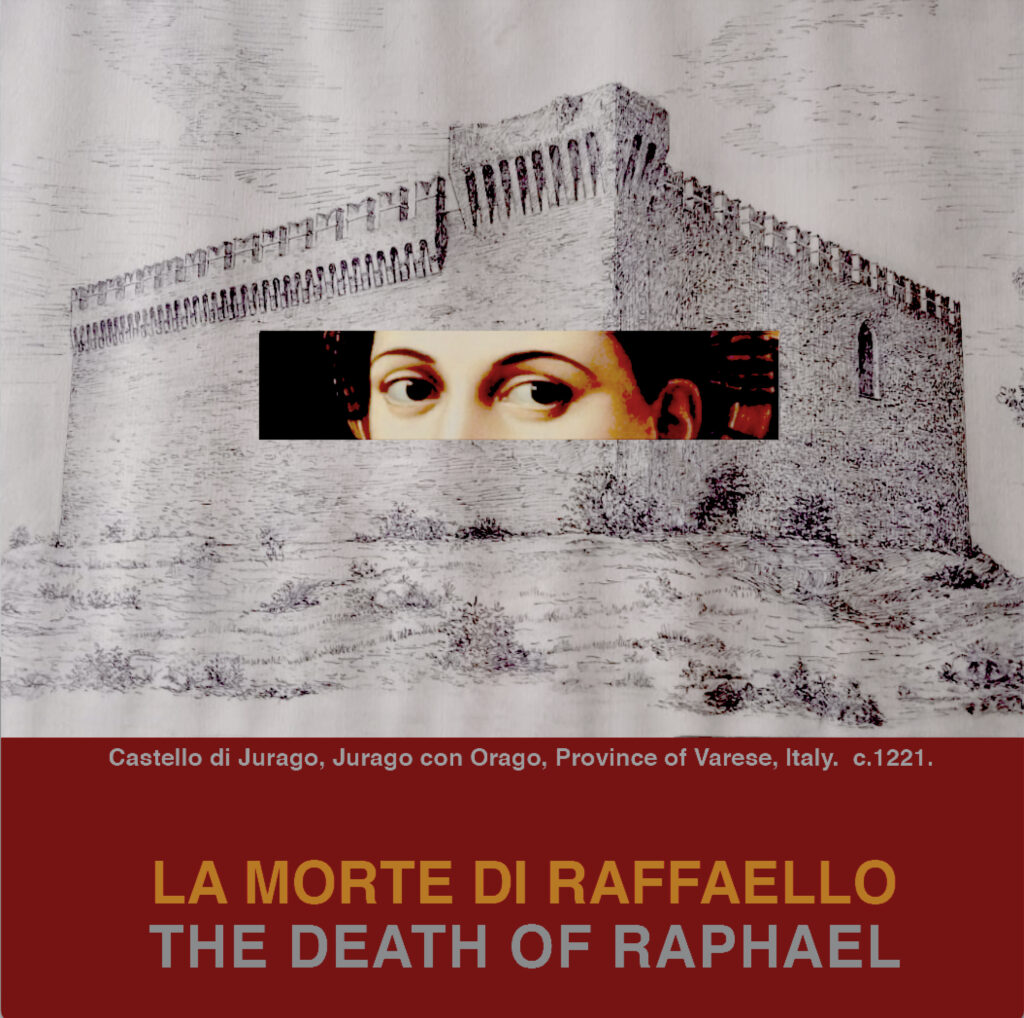 Jazz pianist and accordionist and Ben Rosenblum (NY) premières his new improvised composition inspired by Simon Toparovsky’s mixed media work  of art on paper:  Los Angeles. 3 June 2020.  The commissioned music was sponsored as part of the “Stay-at-Home Symposium” series of virtual collaborations and curated broadcasts based on creative work among composers and artists.

An unveiling and send-off celebration of Simon’s work, elements for a new commission, a shrine home he created for the recently elevated Co-Cathedral of St. John the Evangelist in Rochester, Minnesota.

Franco Rossi commemorates and is honored for five decades of devotion, attention and fostering the promotion of contemporary art with an exhibition of the gallery‘s permanent, international artists’ work– selections from his private collection.

In the fall of 2015, I was invited by the Getty Museum to talk about my work and inspiration to launch a new video series called Getty Inspired.

It was an exciting and surprisingly nerve-racking proposition to allow a Getty videographer to spend many hours exploring my home/lab, watching me work and probing my mind.

I am happy to share the story they produced, which has been added to their library of video profiles of creative Angelenos who find inspiration at the Getty.

original artworks with photo
portraits of artists by Jim McHugh

solo exhibition of sculptures and unique
works of art on paper

complementary study tours:
Getty Center – Cathedral of Our Lady of the Angels

Spectacular Rubens at the Getty Center
and
Simon Toparovsky: Vessels and Channels at
Cathedral of Our Lady of the Angels

new artworks and side chapel installations

exhibition:
Our Lady of the Angels Cathedral
Los Angeles

new artworks and side chapel installations
on Google albums

program + catalog sponsorship:
Embassy of the United States
in Lithuania 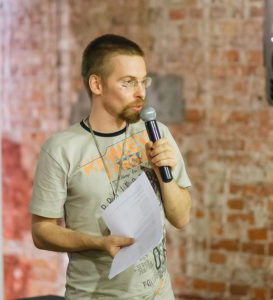 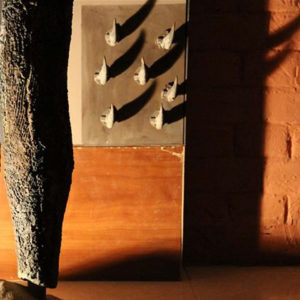 The meaning of the words “pillar of shame” will become clearer if we replace them with the phrase “Hall of Shame”, more familiar to Russian ear. But the word “column” is, of course, an exact match, not devoid of pathos, to the artist Simon Toparovsky from Los Angeles and Ariel Soulé of Milan.

The name of the exhibition refers to the events of XVII century, when, during the plague in Milan, men were arrested on false charges of spreading the disease and executed. Events reflected in the story by the XIX century Italian writer Alessandro Manzoni, were the artists’ beginning inspiration. Four rooms of pieces using painting and sculpture, mixing media to create the installations.

The methods used by the artists suit the Modern Museum’s declared task perfectly – to show how to develop the tradition of modernity in the present time. Soulé and Toparovsky talk to the audience in a language of metaphors and symbols that are woven into a complex narrative.Some metaphors, such as yellow rats pestilence, scattered on the floor in one of the rooms of the museum, are very bright and clear, while others (such as fingers, held in the Buddhist mudra, images of the succulent plants, like the aloe repeated through the installations) might require special explanation. In this case, there are multi-curator comments posted near each installation. But, certainly without further explanation the installation is enough and leaves a very strong impression.

The authors have consistently pursued the viewer through all the stages that accompany any act of “collective madness”: panic, suspicion, the search for the guilty, torture and abuse, and, finally, death.

Particularly impressive is the last part of the installation – “Punishment.” The wheel, which symbolizes one of the worst medieval execution techniques – the wheel, against the famous “execution wall” of the Museum basement,

resonates with the timeless nature of the event, in tragic beauty. The finger gesture of the severed hands form the (Buddhist) mudra for wisdom, transcend the wheel of torture, become the Buddhist “Wheel of Suffering” and simultaneously Wheel of Dharma”, by which suffering can still be overcome. And then, standing against the huge wheel, the torture machine, there is a small bronze toy horse with a broken leg (a powerful symbol, looking back at the suffering through the space where it can not reach). “Shame”, so do not dishonor those who nailed him, and all of humanity.

However, it is certainly not in this simple thought and in the interpretation of symbols, in which each of us can engage in their own way, and in the plastic artist’s skill that might effect the viewer “directly.” Bronze heads without bodies and bodies without heads, hands and weavings, strange plants, oil paint on dimly outlined figures make us look, feeling– coming to think.

Rough light and shadow, bronze sculptures, rocks, and even X-rays occur in many different ways, creating space for the creation of meaning, what, in the end, is perfect in this space in the Modern Museum.

essay:
Cultural Tourism and
the Greater Museum of
Los Angeles

Of course, people outside of Los Angeles know it is its own paradigm. This new city at the edge of our country is celebrated (if nervously) for its space and sunshine. Then there is the richness of inherent juxtapositions and diversity. This is the place where the desert meets the ocean and our front yard stretches to Asia, we live closer to Mayan pyramids than obelisks brought back to Paris from Egypt. And with all that sets us apart, we are known for television and movie production and so we are also ground zero for globalization.

While working with the head of installations for an exhibition of my work in St. Petersburg, Russia last year, this educated man asked me why I would want to live in a place that was about hippies and surfboards. It is easy to relegate Southern California to simple cultural stereotypes. I showed him the Pacific Standard Time website. He looked through the lists of exhibitions, artists’ and movements’ name. He was amazed at the depth of the influences and connections that begin here.

It took someone who loves and knows this place to make the introduction. It was the beginning of a dialog that was the reason I was invited to show my work in the first place. Cultural travelers (virtual or on the ground), sharing ideas, excitement and information with knowledgeable, invested others— this is how to see “The Greater Museum of Los Angeles.”

With impressive alchemy, combining painting and sculpture creates its own rhythm: resonance felt as a dramatic romance. Portraying a 17th century narrative as a contemporary aesthetic and psychological landscape, Ariel Soulé and Simon Toparovsky awaken in us the immensity and solitude of history.The installation La Colonna Infame is a sustained meditation on the repeating cycles of violence in the world, the beauty of justice and the dignity and strength of the human spirit.

These universal themes transcend politics and cultures, demonstrating the fragility of life. With a masterful balance of radical juxtapositions and the underlying virtuosity of stylistic and conceptual coherence, we are drawn through the labyrinth of the installation. This is an original visual poem that, like all important art, invites us to participate without asking.

Perhaps there are only two ways to measure oneself with History. Either to sublimate it, channeling it to the grotesque; or by destroying it and restructuring the phases by taking possession of its motifs to begin to have personal access to the mystery of its labyrinths.

The latter coincides with how artists Ariel Soulé and Simon Toparovsky have conceived the arresting and epic installation La Colonna Infame. In it, conceptualization remains sovereign; abstraction is explored, but latent. The ability by which the artists relate to a significant moment in the world experience is a reflection of the world we each know, not an alternative reality. The instal- lation lives with laws of its own. The resonance of this artwork, as Walter Benjamin wrote about History, is the indispensable
dialog with Memory.

The artists involve more than an intelligent reflection of the effects of the past on the present: a history tracking justice, dignity and human rights. Their work should not be under- stood as nostalgic longing, but rather can be explained as a demonstration of belonging to our time. They re-establish, through reference and staging, an invitation to see the balance of ourselves and the past, more in a philosophical than in an historical sense.

In the hands of Ariel Soulé and Simon Toparovsky painting and sculpture create an evocative instrument through which the original context of the artwork and its universal significance arouse personal reflection. Their “palette” is a poetic association of painting and sculpture and found objects used as a single whole to describe the complexity of the “chiaroscuro of existence”. Ariel Soulé and Simon Toparovsky reveal to us that each time History repeats its dynamics, it moves by combining the next set of articulated similarities. On the broader critical plane it is clear that the artistic intuition that unfolds in the installations tells us that they are conscious of the repeated whims. We are lured into our own inevitable rhythm, a cyclical returning, not least by the vibrancy of what is portrayed– both what is hard and what is beautiful. The whole installation is, for this reason, an imposing and solemn mirror.

La Colonna Infame of Ariel Soulé and Simon Toparovsky establishes the location for the intersection of a number of considerations: including the relevance of the psychological and political in art. The work of these two artists comprises a map with which to navigate some of the next aesthetic and cultural issues of our time.

work in progress:
wax to bronze 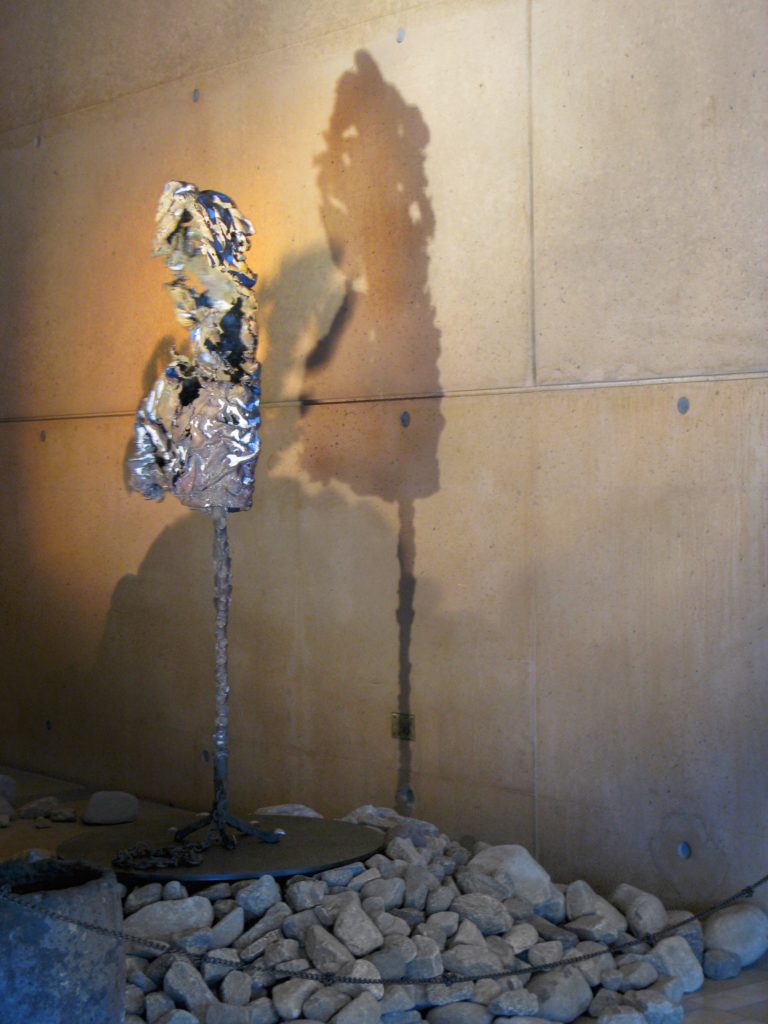 tenth anniversary:
Consecration of the Cathedral
Our Lady of the Angels
Los Angeles 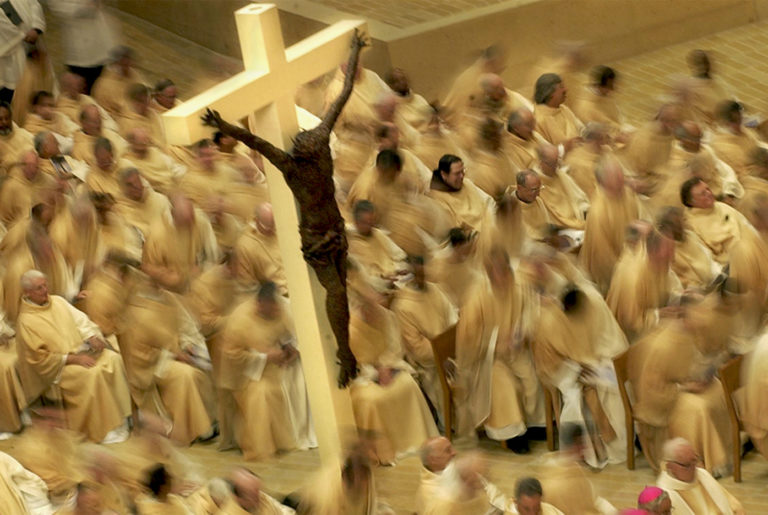 sponsored by:
Consul General of Italy in
St. Petersburg

Ministry of Culture for the
Republic of Italy

Ministry of Culture of the
Province of Milan

sponsored by:
Ministry of Culture, Naples

Consul General of the U.S.
in Italy

In an interview with sculptor Simon Toparovsky, art historian Damon Willick explores issues of religion and contemporary art as they relate to the artist’s practice. Focusing on Toparovsky’s high altar crucifix produced for Los Angeles’s Cathedral of Our Lady of Angels, central themes of the interview include issues of religious identity, site-specificity of works of art, and the spiritual intentions of the artist as they compare to the audience’s reception of his work.

series one. wallworks
in collaboration with
Ariel Soulé

sponsored by:
Ministry of Culture Teglio-Sondrio

sponsored by:
Ministry of Culture for the Province
and City of Milan

Ministry for Museums and
Exhibitions for the City of Milan

Consul General of the U.S. in Italy

Only ardent patience will bring
the attainment of splendid happiness.
Pablo Neruda

Cathedral of Our Lady of the Angels
Los Angeles